Block of tasks for preparation of maps to print

The set of applied tasks Preparation to print is intended for improvement of presentation of a printed map in view of requirements on designing maps, preparations of schemes, atlases and formations of the dismembered images of a map for offset printing. The complex is an additional module to the professional GIS "Panorama".

The basic functions of Preparation to print are united into one panel with the same name. The panel contains following tasks: 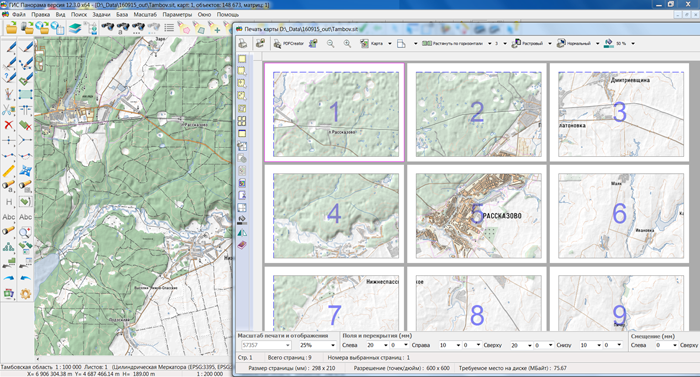 Tasks of creation and saving of map legend are intended for creation of additional objects of designing in the form of the table of conventional symbols and allocation concerning the map image.


Tasks of forming out-of-frame bordering are intended for creation of additional objects of designing in the form of frames of a map sheet, the scheme of allocation of the neighbouring sheets of a map and explanatory titles.


Use of all set of means of system allows to receive a map completely prepared for printing. Print of a map can be realized by several ways.

The first way - an output of a map to the print device (the printer, plotter). This way provides fast reception of a hard copy of a map on a paper (plastic) and is usually used for a print of separate copies of maps.

The second way - transformation of a map to formats: PostScript or CMYK TIFF, CMYK BMP. Received files can be processed in systems: QuarkXPress, Adobe Illustrator, Corel Photo-Paint, etc. with the purpose of reception of four one-bit images of CMYK model used at a print on the offset equipment.

The third way - direct formation in system "Map 2008" four one-bit images of CMYK model in PCX or BMP format, used for reception of the printed forms. The system makes level-by-level processing the image, allowing to carry out automatic cleaning of fields around of titles without deleting the background which is distinct from color of titles. This way allows to carry out qualitative rastering of an electronic map omitting stages of formation of intermediate formats (PostScript, CMYK TIFF, CMYK BMP).