Program of monitoring a database and maps updating

Program of monitoring a database and maps updating is designed to process and synchronize spatial data contained on a digital vector map and stored in various databases.

Program of monitoring can be performed in the following modes:

Updating the information on the map or in the database is carried out automatically in synchronization with changes in this information on the source - in the database or on the map, respectively. The program can perform data updating in synchronous and asynchronous modes. The program contains tools for customization onto various table structures and formats of fields with the coordinates and properties of displayed objects.

The updated thematic maps can be made available to users via the GIS Server or GIS WebServer to organize a graphical interface for accessing databases.

By means of the Program of monitoring a database and maps updating, carried out in a mode of updating of the information in a DB according to a digital map data, it is possible to use any GIS working with maps of a format "Panorama", as a universal tool of visual editing the spatial information stored directly in a database.

The program implements the technology of external storage of cartographic information from the database in the form of a separate digital map. Unlike existing technologies of displaying cartographical data directly from the database, the presented implementation allows to provide direct access to a map without accessing the database, when thiggs is not required. The map can be accessed by users on the local network, it can be accessed for "thin clients", it can be sent by e-mail as an attachment, etc. In addition, the time for displaying cartographic information is significantly reduced. So, for example, for a map containing about 1000 000 objects, at displaying directly from the database several minutes are required, while visualization of the same map, stored separately, requires several seconds. Updating the data by means of the monitoring's program can be done both at a time if necessary, or in automatic mode with a specified time interval. There is also available the function of external management by the Program of monitoring by means of parameterized queries executed from the command line.

The program for monitoring the database and map updating while performing data synchronization operations in cyclic mode (by timer) can "pick up" the settings file without stopping the process. If the settings have changed (for example, the administrator made changes to the settings file or substituted it), the program will automatically recognize it and apply the new settings from the next iteration of the data update.

It is possible to process spatial data in the Base in two variants:

This version of the program provides work with the following databases:

It is possible to connect to any database using a configured ODBC connection (dBase, Paradox, Microsoft Excel, Linter, PostgreSQL, etc.).

The task of placing spatial information in a database is actual for many modern systems. A promising solution in this direction is application of technology of storage of the spatial information with use of the built-in GIS-subsystem of the DBMS itself. Such subsystem allows to store the spatial description of object in the field of a special type. Granting of access to such data and their processing is carried out on the basis of generally accepted standards approved by the Open GIS Consortium. For work with the spatial databases, constructed on the specified technology, the program Panorama SpatialDB Service is intended. The program of monitoring a database and map updating allows to process the metrics of objects placed in a DB in a tabular form.

Program of monitoring a database and map updating allows: 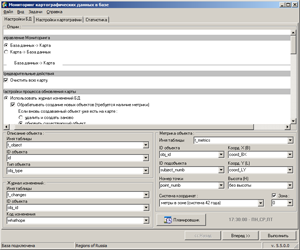 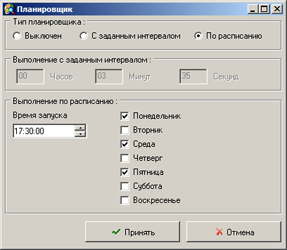 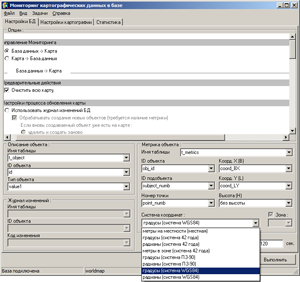 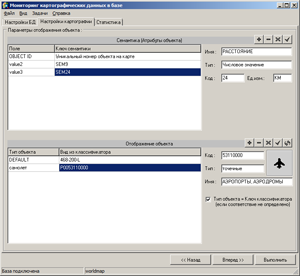 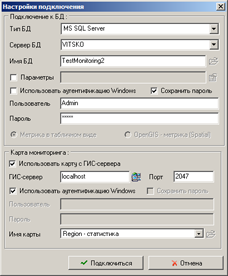 The table of general information contains the data of descriptions of monitoring's object which at its mapping will be presented in the form of semantic characteristics. In the same table, in a separate field, you can specify a certain type of object - the characteristic of the object that affects its external view on the map.

The metrics table is intended directly for providing the access to spatial information of the updated objects for the Program of Monitoring. There are two options for placing spatial data (object coordinates):

At placing the spatial information on objects in the form of the table of coordinates of points, there are supported the coordinate systems of 42 year, WGS84, PZ-90. 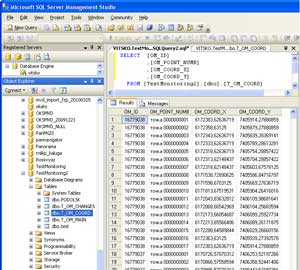 The change accounting's table is designed to register changes to objects to display them on the map. The table of changes account is intended for registration of changes of objects for their displaying on a map. In case the use of this table is allowed in the monitoring's program settings, only those objects of monitoring whose changes are registered in the changes table will be edited on the map.

At working with spatial data in Oracle Spatial format there are the restrictions:

For the monitoring's mode in the direction "Map> Database" it is necessary that interface tables or views in the database ("Object description table" and "object metric table") were accessible not only for reading, but also for writing.

Automating launch of multiple copies of the program

To automate the launch of multiple copies of the Program of monitoring simultaneously, a list of these copies is created using the Launch Manager program included into the software package. Launching the programs included into the data list can be carried out either directly from the program of the Startup Manager of the Program of monitoring or by a special service from the program complex of the Monitoring's Program. The service carries out starting the copies of programs under the list at operating system start even if the user does not log on to the system.

Added into the list of automated startup the copies of the Program of monitoring should already be completely configured for connection to a database and a map and for execution of process of data synchronization between them. Thus, the executable file itself (db2map.exe) can be one for all started copies, and the configuration file and the job log file must necessarily be personal for each copy. 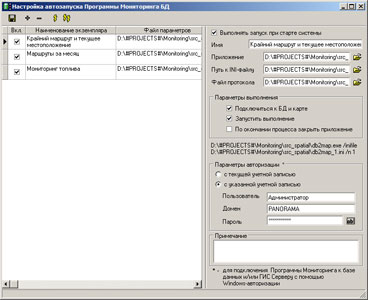 Appearance of the Startup Manager
of the Program of monitoring 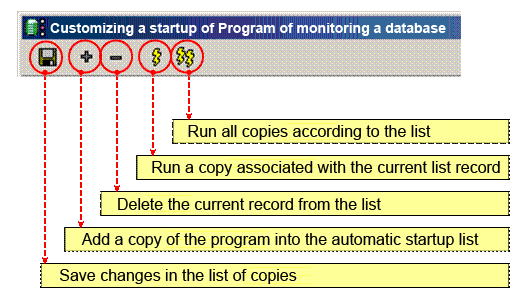 Buttons assignment of the main menu
of the Startup Manager

Work in a mode of System Service

System Service carries out starting the copies of programs under the list at operating system start even if the user does not log on to the system.
The list of copies of the Program of monitoring of a Data Base and maps updating to be automatically launched is generated by the Launch Manager (see above).
The service is managed from the standard operating system console.

When the service starts, it carries out running all copies of the Program of monitoring according to the list previously prepared in the Startup Manager of the Program of monitoring a database and maps updating. When the service is stopped, it sends out a command to shut down all running copies of the Monitoring Program, waits for some time to allow the copy to complete its work independently, and then forcibly stops the process within which the instance is executed.

Remote monitoring of the work process

Each copy of the Program of monitoring maintains its own work log, which can be saved to a text file at a specified periodicity. By providing remote access to viewing such protocol files, the user can remotely monitor the process of the program's work. Access to the work logs of the Monitoring's Programs can be organized both as file access in the local network and as publication on the Internet, for example, using IIS or Apache web servers. 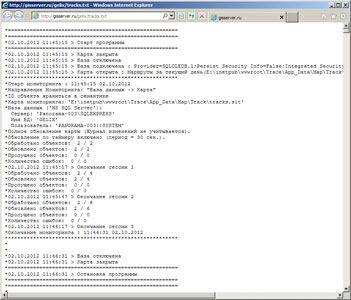 Remote viewing the logs of the Program of monitoring
through the Internet using a standard web-browser.