Universal geoinformation system that has tools for creating and editing the digital maps and plans of cities, processing of remote sensing data, execution of various measurements and calculations, overlay operations, construction of 3D models, processing the raster data, tools for preparing graphic documents in digital and printed form, as well as tools for working with databases.

The product is implemented in languages: russian, english. 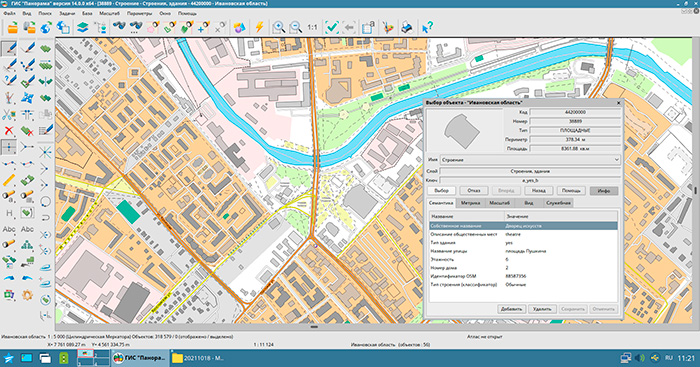 The GIS includes a variety of tools for processing spatial information about the area.

Advanced editing tools of vector and raster maps of terrain and drawing of the applied graphic information onto a map. Support for several tens of various projections of maps and systems of coordinates, including systems of 42 years, PZ-90 , WGS-84 and others. Support of all scale range - from the on-storeyed plan up to a space- navigation chart of the Earth. The volume of one vector map can occupy several terabytes. One raster or matrix map can occupy up to 8 Gb.

Creation and export of maps 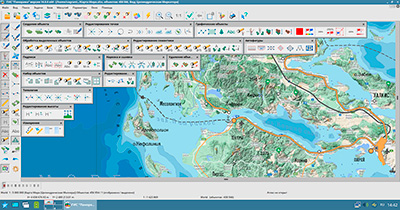 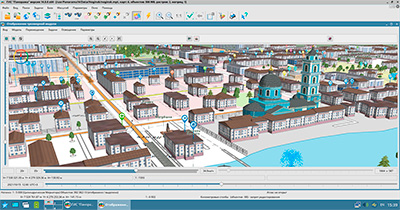 Three-dimensional terrain model in GIS Panorama x64 is a surface built taking into account the terrain relief, on which an image of a vector, raster or matrix map can be superimposed, and three-dimensional objects located on it, corresponding to the objects of a two-dimensional map. It is a full-fledged three-dimensional map that allows you to select objects on the model in order to request information about the object, edit their external view and characteristics. On a 3D model, you can see both ground and underground objects.

Tasks of the network analysis are search of the minimal path between knots in view of values of semantic characteristics of ribs of a network and finding of objects within the specified distance from the specified knot (graph of remoteness). The network model of data (road graph) is presented in the form of the user map containing objects: knot and a rib of a network with semantic characteristics in which the information on a network connectedness and attributes for solving the tasks of the network analysis are stored. 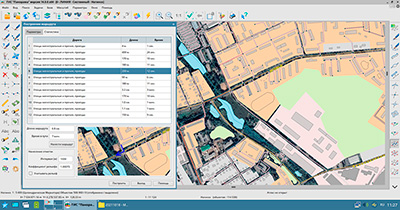 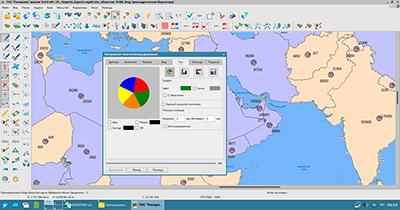 Calculation on a plane and in space

Calculations on a plane and in space in view of distortions of projections, curvature of the Earth, three-dimensional coordinates, matrixes of heights and qualitative characteristics. Execution of overlay operations above multitude of objects. The control of a topological correctness of data. Search and selection of objects by values of attributive characteristics, by the sizes, by spatial position concerning other objects. 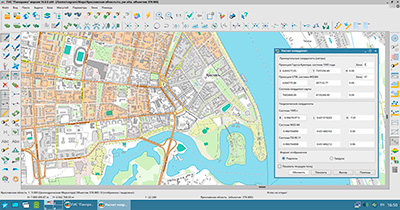 Conversion of coordinates and heights from one coordinate system to another one. To recalculate the orthometric height relative to the geoid (MSL is the mean sea level) to the geodetic height relative to the surface of the ellipsoid WGS 84 WGS 84 and vice versa, MTW format matrices containing the geoid model EGM2008 are used. The value of the orthometric height does not depend on the coordinate system, projection parameters, and other properties of the cartographic image. The value of the geodetic height depends on the parameters of the ellipsoid relative to which it is measured (WGS 84, PZ-90.11, Krasovsky 1940, and so on). To go from the orthometric height to the geodetic height of PZ-90.11, the conversion to the geodesic height of WGS 84 is performed according to the EGM2008 model, and then the conversion, taking into account the parameters of GOST 32457-2017, to PZ-90.11. Earth's Gravity Model (EGM2008) is a geopotential model made up from coefficients of spherical harmonics published by the Geomatics Department of the National Geospatial Intelligence Agency (NGA). NGA provides the model in two formats: in a raster (matrix) image that stores the height of the geoid relative to the surface of the WGS 84 ellipsoid for each coordinate at a given resolution, or in a format that provides numerical parameters - coefficients - that determine the model. 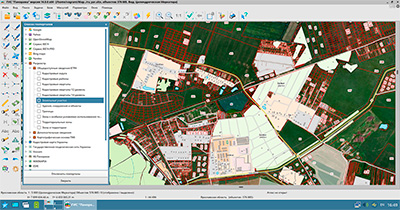 Support of the international standards and protocols of data exchange OGC WMS, OGC WMTS and TMS allows to receive any spatial information from services located in the Internet environment. Viewing images from Google and DigitalGlobe together with other spatial data allows to receive more visual information on necessary territory. As a substrate for any spatial data can act the services of GOOGLE, YANDEX, OPENSTREETMAP, KOSMOSNIMKI, YAHOO!, VIRTUALEARTH.

The complex for preparation of maps for printing is intended for improvement of visibility of the printing map with taking into account the requirements for maps designing, preparation of schemes, atlases and formation of the dismembered images of the map for offset printing.