Tools for development of GIS-applications

GIS ToolKit - a tools set for developing GIS applications, based on the access interface of "MAPAPI" to the GIS-core of "Panorama".

The complex of GIS ToolKit includes a number of separate software products: 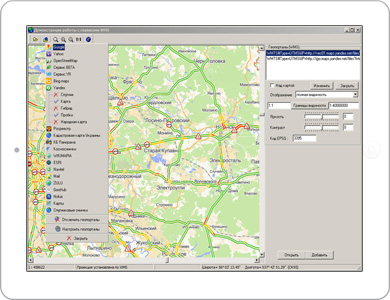 Besides this, the programmer has an opportunity of use of procedures and functions of interface "MAPAPI" of the GIS-core "Panorama" directly, that makes it possible to apply GIS ToolKit at creation of applications practically in any environment of development and in any programming language supporting standards API (Application Programming Interface).

Interface "MAPAPI" contains more than one thousand five hundred procedures and functions for work with spatial data "for all occasions". Visual components are supplied in source codes with examples of applications and documentation. GIS ToolKit is applied also to creation of the dispatching centers and navigation systems with use of GPS-equipment.

Examples of applications in Visual C++, C#, Visual Basic, Java it is possible to find in "download" section . Description of one of the projects created for NET environment.

GIS ToolKit is a set of components for creation of the GIS-applications in the environment of visual programming Borland Delphi, C++ Builder, Developer Studio and Code Gear.

In total at your disposal almost fifty components for all occasions, about hundred classes and more than thousand functions of API-access to GIS-core of GIS ToolKit. Using components and classes of GIS ToolKit, the programmer gets convenient access to the cartographical information in style of Delphi.

GIS ToolKit project is open and is delivered with source codes. GIS ToolKit constantly develops. With each new version it expands the opportunities. Watch over updatings! 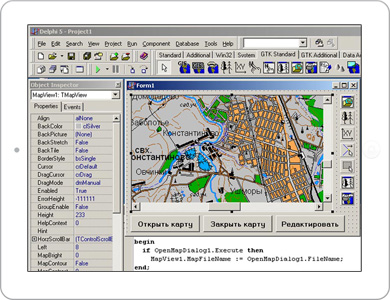 GIS ToolKit provides the complete set of functions of a control system by a cartographical database:

Try it yourself - all simply!

Owing to full use of the opportunities provided by Delphi environment, development of the GIS-applications with use of GIS ToolKit becomes accessible even for first-time programmers. The help system, integrated into the environment, will relieve you of necessity to study mountains of the special literature on cartography, and scores of the examples delivered in structure of GIS ToolKit, will give you an optimum way of use of a particular component.

Tooling GIS ToolKit functionally is divided onto two categories - Basic components without which use it is difficult to construct even simple GIS-application, and Additional components intended for decision of more specific tasks. Components are located in the panel of tools of Delphi and C ++ Builder environment on two bookmarks accordingly - GTK Standard and GTK Additional.

Using libraries of a core of GIS ToolKit complex, you can create applications in various environments, including on the basis of .NET technology, and also carry out own publications in the Internet network with displaying the cartographical information. It is possible to find examples of development of applications on the basis of GIS ToolKit in languages C#, Visual C++, Visual Basic, Java, etc. in our site www.gisinfo.ru.

Work of GIS ToolKit is possible not only in Windows. Using special versions of GIS ToolKit, you can develop applications for such operating systems as Linux, Solaris, Windows CE, QNX, RT OS and others. Functions of GIS core can be called from the procedures written in language PL/SQL in DBMS Oracle environment (32 and 64 bit) on platforms Solaris/Sparc, Suse Linux/Sparc, Linux/Intel. Link of map objects with records of a database, display of maps in WEB-applications is provided.

Specificity of visual programming on GIS ToolKit is such, that work of all its components is built around of one basic component of access to a map. In GIS ToolKit there are two such components - TMapView and his brother-twin TMapScreen. These components perform opening the cartographical information, its visualization, recalculation of coordinates, etc. Difference of the component TMapScreen from TMapView consists in the fact that for visualization of spatial data it uses not one, but two buffers of the map image that allows to accelerate and improve visual qualities (exception of blinking a map) displaying the moving (mobile) and stationary user objects on a background of a map, but thus demands more resource expenses, than TMapView. Therefore a first step of creating the GIS-application on the basis of GIS ToolKit becomes a placing a component of access to a map onto the form (TMapView or TMapScreen). And further all functionality is increased in three steps: place the necessary component on the form, connect it with TMapView (or TMapScreen) and force him to carry out the task predetermined for it (for example, by pressing the appropriate button in the interface). In many cases it spans only one line of a program code.

License for execution of the user applications

Use of GIS ToolKit