Complex of forecasting emergencies is a part of the GIS "Operator" and the GIS "Panorama".

Using this complex, it is possible to calculate the parameters of the damaging factors and build a zone of possible damage as a result of an emergency's occurrence. The damage area is drawn onto the map of the emergency area with symbols that comply with the requirements of the Ministry of Emergencies. The calculation takes into account weather conditions that are entered by the operator at the time of calculation.

When modeling emergencies in a hydraulic structure during a spill of liquid, the shape of the terrain, which is determined by the height matrix, is taken into account. In the emergency's model on a radiation-hazardous object, matrix of a relief can be additionally used to specify the damaged area.

It is possible to save the results of modelling emergency situations for their subsequent reuse. It is also possible to use the source data from already saved models when building a new emergency model. This allows you to perform a more detailed assessment of the development of a possible emergency situation by forming a whole set of models of this situation with a change in only one or several variable factors: for example, wind direction or time from the beginning of the accident.

Using the obtained spatial results of modelling emergencies using standard tools of GIS "Panorama" and GIS "Operator", a number of analytical operations can be carried out. For example, to determine the buildings (personnel, population) that fell into the affected area, to calculate the remoteness of objects from the accident area, to calculate the routes of evacuation or access of special equipment using the road graph, etc.

The "Emergency Forecast" complex is implemented as an applied task intended for operation in the GIS "Panorama" and in the GIS "Operator". The task is started from the menu item "Tools - Run Applications".

Modeling occurrence of emergency on a biologically hazardous object (BHO)

Algorithm of model is implemented on the basis of methodological guidelines «Methodology for assessing the sanitary and epidemiological state in disaster areas, calculation of sanitary losses in epidemiological foci» (Manual for civil servants FOIV, M, 2001). Result of modelling is a set of calculated indicators in accordance with the methodology, as well as an approximate distribution area displayed on the map, determined on the basis of the number of infected inhabitants and the given population density obtained as a result of the calculation. 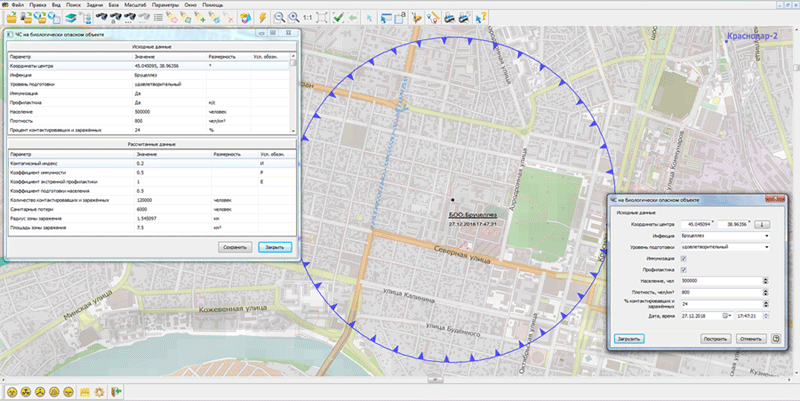 Modeling occurrence of emergency on a radiation-hazardous object (RHO)

As a result of modeling emergencies at a radiation hazardous object, a matrix terrain model is formed containing the values of the radiation dose rate (MDI) taking into account the relief and the time elapsed since the accident.

The accuracy of forecasting zones of Radiation Contamination of the Territory (RCT) as a result of an accident at a nuclear power plant can be improved by joint modelling of the terrain and the radiation environment. 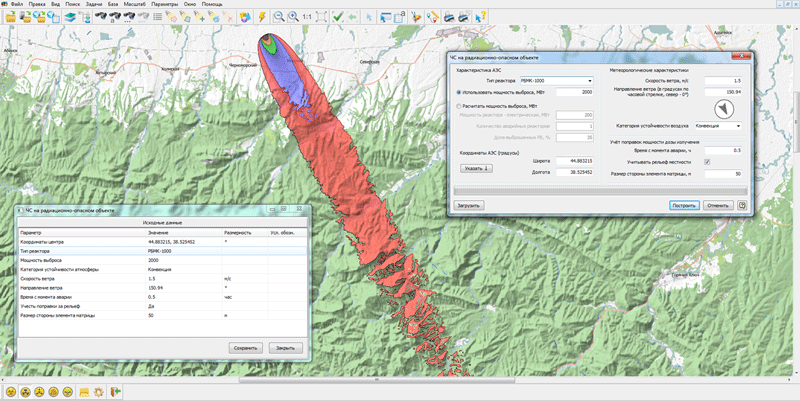 Modeling occurrence of emergency on a chemically hazardous object (CHO)

The algorithm is implemented on the basis of the Methodology for predicting the extent of infection with highly toxic substances in accidents (destruction) at chemically hazardous objects and vehicles, RD.52.04.253-90 (approved by the Chairman of the USSR State Committee of March 13, 90 and the NGO of the USSR of March 14, 90 g .).

The calculations are performed in two separate scenarios:

Based on Appendix 3 of the Methodology RD.52.04.253-90, a directory was compiled that takes into account the method for storing the emergency-chemically hazardous substances (ECHS). The operator, indicating ECHS from this table, should no longer indicate the method of its storage. The table also contains the values of auxiliary coefficients depending on the storage method of ECHS, which are not indicated in Appendix 3 of Methodology RD.52.04.253-90, but mentioned in the context of the Methodology (for example, K1 = 1 and K7 = 1 for compressed gases). 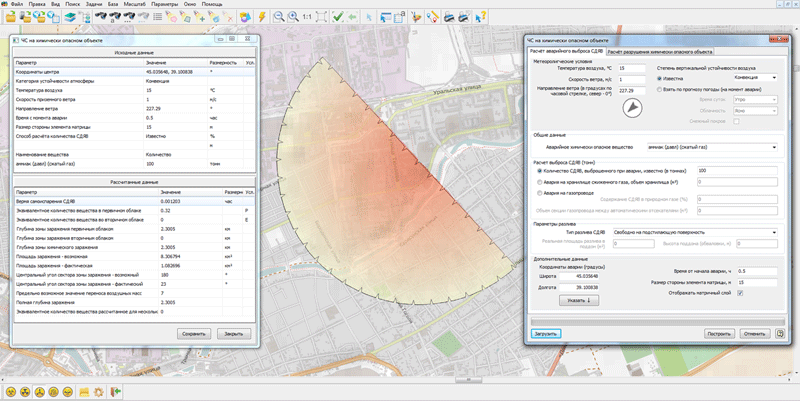 Modelling of occurrence of emergency on a dangerously explosive object (DEO)

It is based on an algorithm whose purpose is to find excess pressure at the front of the shock wave and evaluate the damage caused by it, as well as the nature of the impact of the air shock wave onto a person.
The explosion model algorithm is based on the following regulatory documents and calculation methods:

The scope of the algorithm extends to cases of explosion of gas - and vapor-air mixtures formed during accidents at explosive objects.

The result of the execution of the algorithm for the model of occurrence of emergency on a dangerously explosive object is: 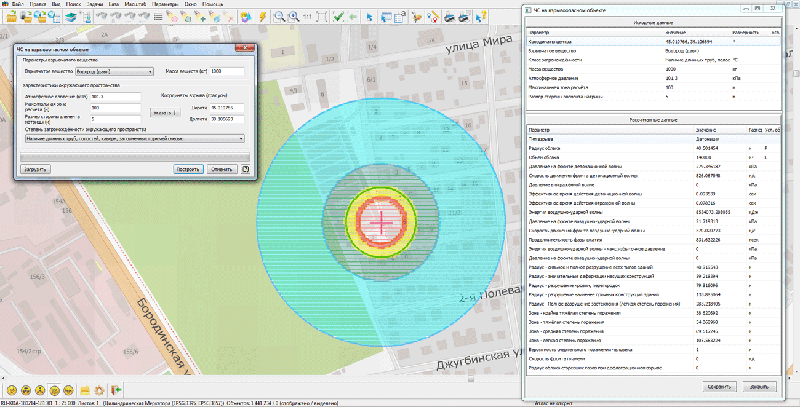 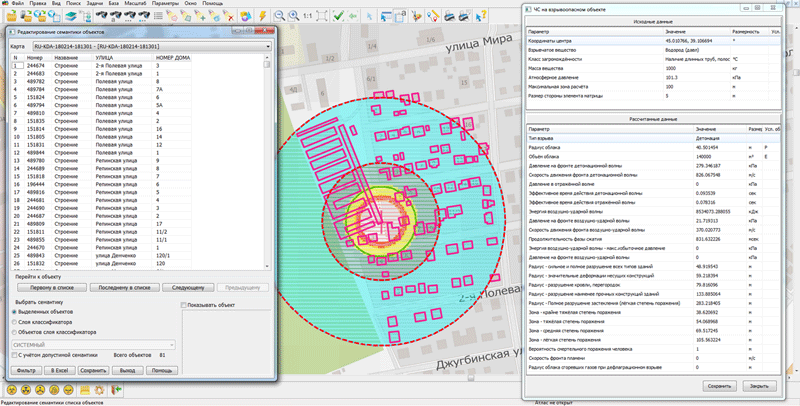 Modeling occurrence of emergency on a hydraulic structure (HS)

The algorithm is based on the technique of "RD 03-607-03. Guidelines for calculating the development of hydrodynamic accidents on liquid industrial waste storage devices. "

When calculating the spreading zone of liquid industrial waste, the data on the terrain are used, therefore, without a matrix of heights as part of the initial data, it is not possible to perform calculations.

The following assumptions are made in the methodology:

Result of performing the calculations of model of the emergency is the matrix of the calculated zone of spreading liquid waste.

Calculation can be performed in one of two modes: 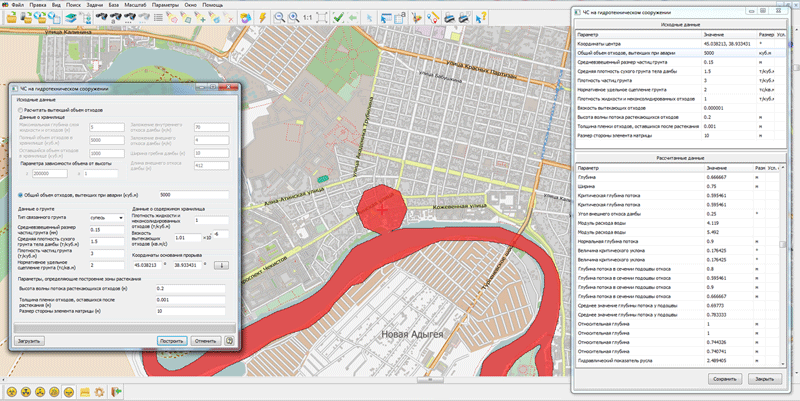